Matt says that if I make the NYT bestseller list 2 more times, I can have a kitten.

And in other news, my teacher friend Greg, student friend Mallory, and a bunch of other young women at Mother of Mercy High School in Cincinnati made a video tribute to WAKE. It is made of awesome.

This makes me even MORE excited for my visit to Cincinnati on the FADE tour, April 3 & 4.

You ladies (and gents) are amazing.
Posted by Lisa McMann at 12:31 PM 8 comments:

You people are determined to get me to come out and play, aren't you.

I hope that you know this is all your fault. We did it, YAY!!!


Love and hugs. Bottom of my hearty-heart. Thank you.
Posted by Lisa McMann at 3:10 PM 8 comments:

There are few things more satisfying than successfully flipping something in a skillet.

I love to cook and I haven't talked about cooking on my blog in a long time. Today, I will tell you about my lunch because it is SO good.

brown rice
roasted cauliflower and broccoli
garlic herb shrimp (yes, it was frozen. I live in AZ. Sue me.)
and topped with avocado.

If you are looking to learn to flip something in a skillet, shrimp works well. So do nuts if you ever toast them for salads, etc. You need a skillet with rounded sides -- so it works a little like a half-pipe for you skaters out there. You gotta move fast enough to clear the top but the curve helps you come back down in the pipe, not outside of it (ideally. Heh.). Start with a smaller sized skillet, like an 8 or 9 inch. Shake the food back and forth a little so you get a feel for how much force you need to put into the flip, and then just go for it.

Once you become flawless with tossing non-damageable things like shrimp or almonds, try eggs over medium/hard and then work your way to over easy. It takes some quick wrist movement and a gentle landing. Flipping eggs over the sink on the disposal side is a good idea until you've got it down. :)

Such satisfaction! And it'll impress people. Like being able to shuffle cards the cool way. It looks cool but takes practice to get it right.

Okay, now it's back to the underground where I am writing GONE.
Posted by Lisa McMann at 10:47 AM 6 comments:

Email ThisBlogThis!Share to TwitterShare to FacebookShare to Pinterest
Labels: lunch, off topic

You guys amaze me. You're astounding. Fabulous. Unstoppable. (And extremely good looking.)

Thank you for buying my books and for telling your friends!! FADE hit the NYT bestseller list with its first week's sales. That so totally rocks.

Let's keep it going! If you have a chance in the next few days, please tell a new friend or two about the WAKE series.

About the next six weeks... and GONE (Wake book 3)

In case you haven't heard, FADE (Wake book 2) is out!! You can find it in stores and online everywhere.

And now, it's time for me to hibernate and really focus, to pour my heart into the third and final book, GONE, so that we have something fantastic to deliver to you in spring 2010. I have a lot of work to do on it yet before I go on tour at the end of March (with Cassandra Clare, yay!).

So if you cannot find me in real time online, or if you have sent me fan mail and haven't heard back yet, or if I haven't responded to your Facebook, Myspace, or Goodreads message or comment, please understand that it's because I need to focus on making GONE the best book I can make it.

Thanks to all of you for your awesome support and for buying WAKE and FADE!! I'll come out to play more often when GONE is all shiny and awesome. :)

Email ThisBlogThis!Share to TwitterShare to FacebookShare to Pinterest
Labels: GONE

If you want to read some recent interviews, try these:

And here's a neat new review of WAKE by a very cool person I met the other night at Changing Hands.
Posted by Lisa McMann at 10:03 AM 2 comments:

Email ThisBlogThis!Share to TwitterShare to FacebookShare to Pinterest
Labels: Interview

Hey all! Here's where I'll be this week:


*Tuesday, February 10, RELEASE DAY!!!!!
(okay, I'm lame. I have no plans for this day. I'll be updating websites to say "FADE is now available!" or something. Chatting on Twitter or Facebook. General goofing off.)

Email ThisBlogThis!Share to TwitterShare to FacebookShare to Pinterest
Labels: the next book after the wake trilogy

In honor of the release of FADE (Wake, Book 2), and also on behalf of the 859 people who have tagged me for 25 Random Things on Facebook, I give you a glimpse behind the scenes of Cabel Strumheller, book character extraordinaire.

1. Sometimes, when I think about my mom, I can’t really remember what she looks like. I hate that.

2. I feel kind of guilty that I don’t think about her much at all, and then I wonder if she ever thinks about me. Probably not.

3. When I was in the hospital, I read a lot. Like, everything on the book cart. Even the Judy Blume stuff, which wasn’t too bad, actually.

4. I hate mowing the grass, especially the back yard behind the shed. My heart always pounds a little, like something’s going to jump out at me, even though I know it won’t. You know what I mean?

5. When I’m at school, I usually feel like I’m acting. Most people there have never seen the real me.

6. Sometimes I miss living with my brother Charlie. Back when it was just the two of us, I mean. After dad, but before Megan came into the picture, even though she’s totally cool and I like her a lot.

7. But if I think about it, I really do like being alone sometimes...I like that quiet house creakiness right before I fall asleep.

8. I like the sound of Janie breathing even better, all quiet and smooth, when she’s just falling asleep.

9. I’ve always wanted a pet. A dog, probably. But I really get scared sometimes that I wouldn’t be around enough for it. That I’d let it down and it would be all lonely ‘n shit. There’s enough of that in the world.

10. After I met Janie and figured her out a little, I started watching The X-Files reruns. She’s not so strange after all, you know? Compared to that, I mean.

11. I would totally never do a Facebook page unless I had to for work. I mean, what’s the point? It would just be acting all over again. That gets a little tiring.

12. Unless Janie signed up too.

13. Which she totally wouldn’t.

16. Changing the subject: my favorite color is green. Not like Kelly green or grass green or that disgusting mint color that reminds me of old people and babies. More like the color of dried herbs. Sage green. That’s it.

17. Sometimes after dark I get the board out. There’s a skate park by the school. I’m pretty good, still.

18. I really freaking hope I can keep this car forever.

19. I have no idea what to think of Janie’s mother. She is the strangest person I’ve seen, and believe me, I know some strange people.

21. I enjoy reading the news. I also like knowing a lot of random shit. It amuses me to see people’s reactions.

22. That time when Janie hit me in the gut with the door handle after the dance? I almost didn’t follow her. I mean, god. Who would follow a girl like that?

24. I really like to cook, and if anybody wants to give me shit about that, I’ll f*cking punch their lights out. Cooking’s dope. It’s like getting a chemistry formula right or putting a car together. Recipes, instructions, formulas...it’s all the same.

25. Some people think guys like me don’t exist. That’s a lie. Don’t believe it. I’m right here. We’re everywhere. The quiet ones. If you can look away from the shiny for a minute, you’ll see us.
Posted by Lisa McMann at 12:01 PM 15 comments:

Email ThisBlogThis!Share to TwitterShare to FacebookShare to Pinterest
Labels: Cabe

A reminder -- lots of books to win here! Easy entry. Click on the image.

To enter, simply send an email to pulsespringfling@gmail.com with the words Pulse Spring Fling! in the subject line and answer the question, "Who is your favorite fictional couple?" in the body of the email.

One entry per person, US residents only. Contest begins January 1, 2009 and ends February 14, 2009. Winners will be announced Monday, March 2nd, with prizes delivered mid-March.
Posted by Lisa McMann at 5:36 AM 4 comments: 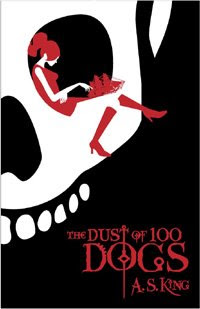 THE DUST OF 100 DOGS is officially out. Congrats, Amy!! Can you believe the day has finally come?

Readers, check out what Reviewer X has up her sleeve in celebration. Win stuff...including signed copies of WAKE and FADE.
Posted by Lisa McMann at 6:27 AM 2 comments: