Announcing CRASH: book one of the VISIONS series

How much do you love the cover of my upcoming teen novel CRASH? Read all about it at Hollywood Crush!
CRASH, book one of the VISIONS series, comes out January 8. 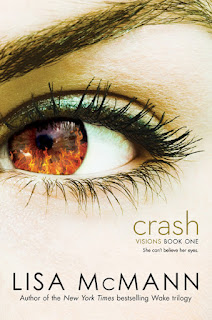 Jules lives with her family above their restaurant, which means she smells like pizza most of the time and drives their double-meatball-shaped food truck to school. It’s not a recipe for popularity, but she can handle that.

What she can’t handle is the vision. Over and over, Jules sees a careening truck hit a building and explode... and nine body bags in the snow.

She has no idea why this is happening to her or if she’s going crazy. It hardly matters, because the visions are everywhere--on billboards, television screens, windows--and she’s the only one who can see them.

But it’s not until the vision starts coming more frequently, and revealing more clues, that Jules knows what she has to do. Because now she can see the face in one of the body bags, and it's someone she knows. Someone she’s been in love with for as long as she can remember.

Don't forget to add it on Goodreads!
Posted by Lisa McMann at 10:18 AM 6 comments: