What is Infinity Ring? It's a seven-book time travel series brought to you by the creators of THE 39 CLUES (Scholastic), written by six different authors (including me!), and it includes an AWESOME online game component which you'll find on InfinityRing.com. You can read everything about it here in the Press Release.

Don't worry -- I'll still be writing THE UNWANTEDS series and my teen novels like DEAD TO YOU as usual. This is just a bonus book. :)

I am so excited to be part of this cool series. I'll be writing book three. One of the funnest aspects of this for me is that all the other authors who are taking part in this are really great people with amazing ideas. And it's also really fun to revisit history and figure out what would happen if things didn't go as they should have. 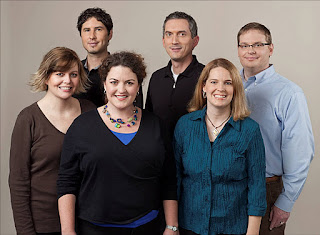 There's even an article in the New York Times -- cool!

Arizona YA authors, teachers, and librarians know how to par-tay!

The collective of young adult and middle grade authors is growing by leaps and bounds in Arizona, and the cool thing is, we all like each other. Last year we had a party for ourselves and it was a blast. This year we said to each other, "Hey, let's invite some more people who love books as much as we do." So we set a date (Dec 10) and a location (my house), and the eight authors who could attend got busy inviting as many of the teachers, librarians, and booksellers we could think of. And then we asked them to invite a coworker or two.

Word got out. I remember saying, "The more the merrier!" Some teachers and librarians from over a hundred miles away were planning to come. We were amazed and excited. We were about to have our own mini ALA + NCTE + BEA convention right in my house!

In early December, I started mentally adding up the potential number of people who might show up to such an event (free food and wine!) and for about 24 hours, I panicked. What if everyone we invited actually showed up? And then I remembered that lots of people plan to stop in at an open house, but when the time actually comes, things happen, or they realize I live in the boonies, and they can't make it after all. So I panicked again. What if nobody showed up? I figured at least my fellow authors would come, so we could hang out and feel like losers all together.

But my author buddies convinced me that people would come. So I started thinking, hey, if we're having our own little convention, we need to give stuff away. We need SWAG! I sent out a message to my awesome team at Simon & Schuster (Simon Pulse and Aladdin), asking if they had any arcs or finished books floating around to contribute. They said "Sure!" and got busy, reaching out to other S&S imprints as well. The other authors contacted their publishers too. In addition, we all donated books of our own to the cause -- Arizona has had some tough times and no funding for books in libraries and schools lately. We wanted to help, and we wanted to get more new books into our local schools and libraries.

The week of the party, I left on a three-day trip, and when I returned, my husband took me by the hand and said "Come with me." He showed me the entryway of our home. There were nearly twenty boxes stacked high from some amazingly awesome and generous publishers.

He nodded. We set up on the ping pong table. There were hundreds of books, posters, bookmarks, reading guides, socks, thumb drives...and more and more books. It was overflowing and glorious. 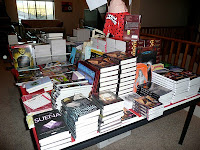 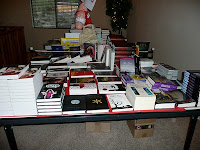 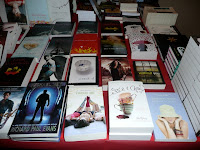 We stashed the empty boxes in the bathtub to get them out of the way. 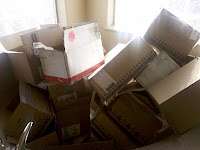 On Saturday the 10th, the authors all arrived early with homemade appetizers and sweet snacks for our 5-8pm open house. 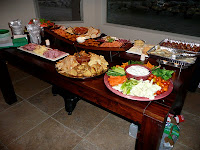 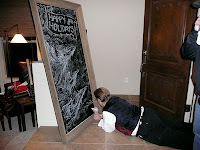 Darth headed out to the driveway to greet the book lovers. 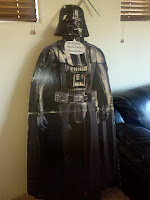 Finally, the magic hour of 5pm arrived.
.
.
.
No one came. The clock ticked and echoed in the canyon. The food sat, eager, then concerned.

And then...a car containing two people pulled up. The people got out and came inside.

As any author knows, two people at a signing is worse than a no-show. It's painful and awkward and everybody involved feels weird and bad. Two people attending an event at which eight authors are present...well. It hurts to think about it.

Luckily, this car was followed by carload after carload, a maze of headlights in the darkest corner of the valley, streaming through the neighborhood. Hooray! We built it. They came. 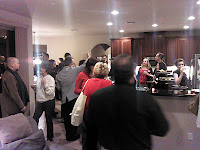 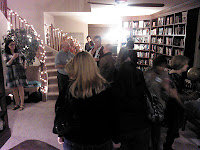 As people arrived, my teenagers greeted them with applause -- they thought it would be great for the guests' self-esteem. After all, who doesn't like a grand entrance?

Over the next three hours, one hundred fifty Arizona librarians, middle and high school teachers, booksellers, and authors came together, met new people who shared their love for children's books, made some connections. They left with full stomachs, books in the crooks of their arms (yes, they all went for the books first, then the food), and grateful hearts for the generosity of publishers 2000 miles away. Before the night was over, the books were gone.

We want to profusely thank the following publishers who gave us books, arcs, and swag of all kinds: Simon & Schuster Childrens' Publishing, Random House, Scholastic, Walker, Fiewel & Friends, and Bloomsbury. 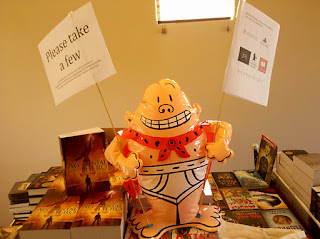 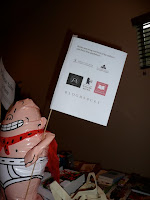 The Wattpad Pulse It Winner

of the trip to New York City to spend a day shadowing a real live editor at Simon & Schuster, and some time hanging out with me, is...

WAIT. First, I have to say something, and it's from the heart:

I was absolutely blown away by all of you who entered. It made me happy that there are so many of you out there who love to write as much as I do. I am really proud of each person who put a little piece of him or herself out there for others to see. That's really hard to do.

Narrowing the entries down to the top ten was really difficult. There were so many great stories. Our team of judges had a really tough time deciding! We had a variety of reasons why these ten were chosen, including writing ability, style, creativity, plot, voice, and uniqueness in coming up with an idea that others haven't thought of.

Choosing the winner out of these ten great stories? One of the most difficult choices I've had to make in a while. A long while. I want to congratulate again the nine finalists, and I want you to hear me -- you are talented. You have great potential. If you enjoy writing, you should keep doing it, because you are good at it.

Being a writer, getting published, winning prizes when you're up against hundreds or even thousands of others is a hard mountain to climb. If you have the stamina and can handle the rejections, the near-misses, the not-quites, you will succeed eventually. You have to keep going, and going, and going. I had over a hundred rejections for the first novel I wrote, and it never got published. Nor did my second novel. But I kept writing, and I kept going, and I kept looking at rejection in the face and saying, "You are only making me tougher. You are only making me want to fight for this more."

Thanks for reading this (even though I know you all skimmed that bit, I hope you went back and read it again). :)

And now, for the moment you've all been waiting for, THE WINNER of the Wattpad/Pulse It story contest is... *drumroll*

CONGRATULATIONS!!! I chose your story because I loved the way you approached the prompt. I love that you made the long-haired main character a boy. I love that you added the hint of a paranormal element with this boy having the strength similar to Samson (and I LOVED that you didn't name him, but made that story sound ominous, and it made the reader wonder what kind of society they lived in), and I liked the twist at the end. Your idea was fresh and different. The thing that clinched it for me, though, was your sense of voice in the story. It was strong and distinct, and I could feel his attitude, I could hear him speaking and thinking in my head. Voice is so difficult to learn to write well -- some writers have it naturally and some have to work very hard to achieve great character voice. Whether you had to work at it or it came naturally, it was there, and it was excellent. Additionally, some of your phrases were really stunning. I remember thinking "I wish I'd written that" a few times as I read your story.

lucille0912, I look forward to meeting you! I’ll be emailing you shortly so we can arrange your awesomely awesome trip to NYC.

Congratulations again to the winner and to all the writers who entered the contest. You are amazing! Keep going. :) And please stay in touch -- you can find me often on my facebook fan page and twitter.
Posted by Lisa McMann at 4:06 PM 8 comments:

I know you are all waiting on the edge of your seats to find out who the winner of this contest is! There were a lot of entries to the contest (over 300!) and now we’re finally close to announcing. Well, almost. :D

To celebrate CRYER’S CROSS releasing in paperback this coming Tuesday, I am announcing the top 10 finalists for this contest! As the ten of you listed below all made it to the top with your excellent stories, I wanted to say congratulations by giving you a set of ALL my books! Email PulseIt@simonandschuster.com with “Lisa McMann Final 10” in the subject line & your full name and shipping address in the body of the email to receive your prize.

Tune back in here on Thursday, December 8th, around 7pm EST (4pm Pacific) for the official announcement of the final winner of the trip to NYC!

OK – enough of the suspense. Here are the finalists (in alphabetical order)!