See you at the Tattered Cover Bookstore on Colfax this Saturday, Oct. 1st, 3pm. I'll be handing out special Unwanteds prize packs with purchase of the book.

Coming soon -- stops in Holland, Okemos, and Ferndale, Michigan. Join me in my home state!
Posted by Lisa McMann at 12:06 PM No comments:

The Unwanteds Blog Tour is over, and we have a winner!

The grand prize winner of The Unwanteds book club/class pack of books is...

Heather from Buried in Books!

Congratulations to you and all the recipients of your pack of books. I hope you enjoy!

Many thanks to Heather and Danny from Kismet Book Tours for making this blog tour so fantastic for me, and for all of the awesome bloggers who worked hard to keep the tour rolling along. I feel very lucky to have been a part of one of your tours.
Posted by Lisa McMann at 5:07 AM 4 comments:

THE UNWANTEDS is available NOW in bookstores and online.

Note: I will be handing out The Unwanteds collector packs with purchase of the book at these events!

If you're not on the newsletter mailing list, join now! I do exclusive contests for newsletter subscribers, as well as let you know what's new with me and the books and the family, and what books the McManns have been reading lately. I send roughly 6 newsletters per year. Join here: http://lisamcmann.com/html/contact.php

WINNING ENTRIES - Congrats to all who played!

For the Unwanteds contest, you had to put two animals together, tell me what they'd be called, and describe what they looked like. Here are my favorite three:

1. If I could put two animals together it would have to be a pig and a chicken (a Picken) that way your could get your bacon and eggs from one animal. The animal would have the body of a pig with the face and butt of a chicken and completely covered in feathers. by W.E.

2. 1. Chonky :D - Cheetah/Monkey but it's more fun to pronounce it chunky. See a hybrid between a money and a cheetah would allow the animal to be able to travel effortlessly through the trees and run speedily on the ground. 2. Cat/horse- I only like that one so that it could make the sound MEOWNEIGHHHHH! Because seriously what's a hybrid without an awesome sound :) by T.P.

3. An imaginary creature that I've always thought would be cool is a mix between a dolphin and a unicorn, uncreatively named a unifin (although it does have a nice ring to it). It has the shape of a dolphin, but instead of flippers it has short forelegs with hooves, and it's head is that of a unicorn. It's mane resembles seaweed but can appear in a variety of colors, and whichever color the mane is matches the color of it's long, fish-style soft dorsal fin, which is in place of a dolphin's dorsal fin. Unifins thrive underwater, although they can go on land for short periods of time, in which they shift to resemble regular unicorns. PS. I made it to the end! by M.W.

These three each won a signed copy of THE UNWANTEDS.


For the DEAD TO YOU contest, you had to describe in a word or phrase how it would feel to find your family again but not remember them.

Our winning entry was: Desperate to be invisible but aching to connect - by S.G.


For the WAKE TRILOGY contest, you had to tell me why you neeeeeeeeeeed a box full of Janie and Cabe. Here is the winning entry:

Okay. This is a doozy. It's a reason I Neeeeeeeed a big ole box full of Janie and Cabe. Truth is it's because aliens invaded my podunk little town of Ringgold. Yup. They just up and swooped in! Anyway, they'd only been here for a few minutes when they heard of this amazing series of books: the wake trilogy. (I guess aliens are big fans of reading. Who knew, right?) And, being aliens, they knew the fastest way to get us earthlings to do anything is to abduct us. So they came to my house in the middle of the night, abducted my family, and demanded that I find them a set of these AHMAZING books. And I, being thoroughly and completely miffed at such behavior from Ringgold's newest inhabitants, had to agree. (They were aliens after all. Kinda creepy.) So, that became my quest: find a set of the WAKE trilogy, and get my family back. (Well, except for my little sister. They can have her. :P) I was beginning to lose hope, about to go into hiding, when BAM! There's my answer. Right there in my email, just waiting for me to open it. :) So. That's my tale. My best reason why I NEEEEEEDDD those books. Don't believe me? Check out the picture I attached. It'll convince you my story's true. :)

P.s. I swear I'm normal... I just get all dorky when left to my own devices. Oh, and I made it to the end of your newsletter. It rocked my socks. Or something like that. Cause socks don't actually rock...unless they've got sparkles. Okay...ramble over. Just go ahead and pat yourself on the back for making it throught this babbly email. And for being awesome. BYE! by A.L.

I love this picture so much! 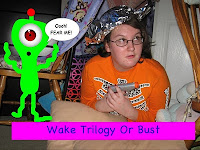 The winner for this contest was Aydrea. Congrats! She chose an ARC of DEAD TO YOU as her prize from my shelf.

Thanks to all who entered not only for entering, but for following directions so well. Casey (my assistant) says she's not even going to ask for a raise because you did such a great job. Hooray!
Posted by Lisa McMann at 10:18 AM No comments:

Email ThisBlogThis!Share to TwitterShare to FacebookShare to Pinterest
Labels: contests

If you haven't had a chance to buy THE UNWANTEDS yet, now's a great time! You can find it in your local independent bookstore, B&N, Target, and online everywhere books are sold. If your favorite store doesn't have it, ask them to order it for you!

The first leg of THE UNWANTEDS tour was absolutely fantastic. Eleven days in the southeast part of the country with Margaret Peterson Haddix - what a blast! I met so many incredible students, parents, librarians, teachers, and booksellers. Thank you ALL for coming out and making everything fun.

I'm home for a few days (working on copyedits for THE UNWANTEDS Book 2!) but head out next week to the Milwaukee & Chicago areas.

In mid-October I'll make my way back to my home state of Michigan, making stops in Holland, Okemos, and Ferndale.

Then, closing out 2 months of touring, I'll be in Houston for the Tweens Read Book Festival, yay!

If you are in the area, please come! I'd love to meet you. Thank you so much for your awesome support of this book! I hope you enjoy the entire series!

The Unwanteds tour stops this week & a great review

Please come, I'd love to meet you!

And a great review from Shelf Awareness:

In her first book for middle-graders, Lisa McMann (the Wake trilogy) creates a magical adventure that serves as a worthy successor for fans of Harry Potter. The author introduces us to Quill, a land whose governors label artistic children "Unwanted" and deport them to the Death Farm. On the morning of the government's annual Purge, the governors separate the Stowes, who are 13-year-old identical twins: they keep Aaron ("Wanted") and ship Alexander ("Unwanted") off to die. High Priest Justine warns that "creativity [leads] to revolt," which doesn't faze law-abiding Aaron. He will serve her and her Quillitary, an army of Wanteds, and co-exist with the Necessaries (the sect to which his parents belong), who must perform menial labors.

The Unwanteds do not undergo the fate they expect at the Great Lake of Boiling Oil, however. Instead, they are spared by Mr. Today, a mage who has been saving children for decades. He invites them to Artimé, where artists are not punished but rather rewarded and their gifts nurtured. While Quill is colorless and flooded with suspicion, Artimé is vivid and inspires a feeling of security. If their magical world were ever to be unveiled, the residents of Artimé would be prepared to battle with the Quillitary--which would pit Alexander against Aaron.

McMann creates a spectrum of well-defined worlds, peopled with characters that resemble archetypes yet retain original qualities. Stunning fight sequences make use of unique weapons such as slam-poetry charms and origami dragons that breathe fire. This masterpiece delivers a new spin on what it means to be wanted. --Adam Silvera, a bookseller and an intern at Figment.

Discover: A middle-grade dystopia where drawing in the mud gets you banished to the Death Farm. What's on the other side?
Posted by Lisa McMann at 8:59 AM No comments:

Cryer's Cross gets a new cover for the paperback 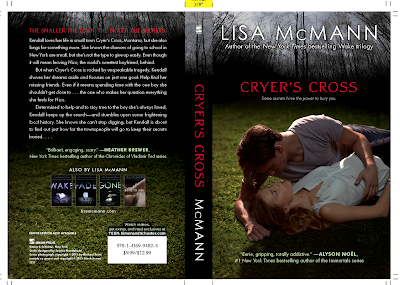